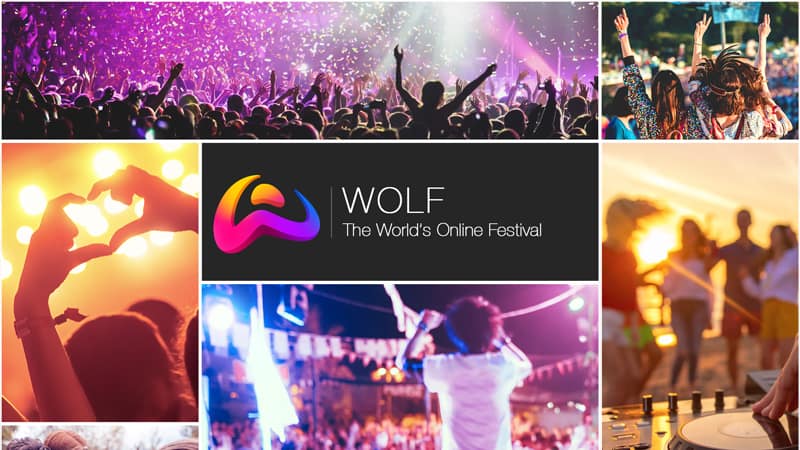 So just what is the World’s Online Festival, or, as we call it for short: WOLF?

WOLF brings the magic of real-world festivals to the online world – uniting people across the globe in discovery, entertainment, and belonging in the World’s Online Festival!

It’s a destination for DJ sets, open-mic nights, chat shows, and friendly banter. You can become an entertainer and perform on the digital stage in a place where you can truly be who you want to be. Discover new experiences and ways to express yourself alongside people just like you. Capture a piece of festival magic in your own Groups and audio Stages where you can entertain, host your own events, or just relax and play games with friends.

You can jump into the action on Android and iOS. And we provide a place where your privacy is No.1, so your identity and data are safe with us. So, what are you waiting for?

Want to be a WOLF superstar? Host your own talent show? Become a king or queen of comedy? Create a festival? That’s what Stages are for! It’s a feature where up to 5 people can take the mic and start entertaining. It’s where the WOLF magic happens.

You can join a Group with Stages and grab a mic, or create your own Group and bring people along for the ride.

Groups are user-created chat and audio rooms that anyone can create, in which to host and listen to tons of diverse shows we having going on. You’ll find like-minded people, a place to explore what you love, meet new friends, share funny images–and just enjoy your online social life.

Most Groups do not have any joining requirements. However, some Groups require a user to have achieved a certain account level. A user increases their account level by being active in the app–joining other Groups, playing games, earning achievements, as examples.

Some Groups require users to have a password to gain entry; others are invite-only Groups.

Within Groups, there are a number of roles:

WOLF has lots of fun in-chat games that users can play by themselves or with others.

There are more than a dozen Game Bots that let users play classic games like Hangman, test their trivia and maths skills, as well as engage in monster battling, building an underworld empire, and fishing for treasure in the ocean. There are also special audio games to play that get you up on the Stage and interacting with the audience!

The WOLF Blog (right here) is where you can stay up to date with the latest news, competitions, events, and releases that are happening in the app.

We host monthly gaming challenges where users can win prizes; community events give users the chance to share their creativity with everyone on the app and earn exclusive rewards for it; and we advertise unmissable user-created events!

Our official support page is a centralised resource for any questions/issues that users might face. Over there, you can learn about Stages, Reputation, Achievements, how to reset your password, and more.

WOLF wasn’t always the World’s Online Festival. For several years, we were called “Palringo”–and Palringo Ltd is still the name of our parent company! We had a lot of great years as Palringo, but when we introduced audio Stages into the app, we realised it was time for us to take the next step in our online-festival journey. We were still the old app that people loved, but we were becoming so much more–a place more about entertainment and expression than ever before.

So you know where we’re at now, so why not find out where we’ve been?

Palringo launched in 2006, developed by then 21-year-old Martin Rosinski as an instant messaging tool for his father’s engineering company in Newcastle, UK. Fast forward to 2012 and Palringo transitioned from B2B to B2C as users began forming groups with particular interests, with a specific focus on games. The business model evolved to selling virtual products such as rich media sticker packs, Bots and functional utilities.

In September 2014, Palringo took further steps in cementing its hybrid of instant messaging and gaming by adding gaming capabilities on top of an already existing messaging platform. Then, in May 2015, Palringo acquired Finnish chat games developer Tribe Studios, best known for its patented Dramagame technology.

WOLF has amassed over 80 million accounts across the world. It has more than 380,000 Groups–user-created chat rooms dedicated to everything from casual chat, TV and movies, music, singing, poetry, video games, anime, and much more.

Headquartered in London, WOLF has offices in Newcastle and London in the UK, and Amman, Jordan.

We’ve always been involved in multiple charitable campaigns over its lifetime, drawing on the continued generosity of its user base.

The app’s first charity campaign in 2013 came off the back of users discussing how they could contribute to the Gulf region–a popular subset of the user base. In response, we launched a charitable initiative during Ramadan. To contribute, users could donate credits (in-app currency), through a unique charity Bot. This initiative saw hundreds of users give to charity, with 20 donors who gave more than US$1,000. In total, the app and its users raised over US $230,000 for Charity Right and Islamic Relief.

These charitable efforts continued in 2014. Unlike 2013’s campaign, which was targeted at predominately users in the Gulf region, this campaign was open to everyone. It added charity Child’s Play, who provide video game entertainment to sick children in hospital. Once again, users could give via a Charity Bot for Child’s Play and Islamic Relief Bot. They could also buy special message packs, with all the proceeds going to charity. In total, users raised over $235k.

In 2015, we ran “Fish for Hunger”, a charity campaign based around its Fishing Bot to benefit Action Against Hunger and Islamic Relief Worldwide. This event incentivised users to donate around a series of unique fish that were released for the bot, and selling boosters that helped users catch them. There was an average spend of $50 per user who participated, with one user contributing a massive $14,000, reaching a total of $300,000.

For its 2016 charity campaign, we released a new bot–Hero Squad–to benefit Action Against Hunger and Islamic Relief. 50% of all proceeds from the purchase of the game and purchase of in-game boosters was split between the two charities. We raised a total raised of $207,000.

The next year, Fish for Hunger 2017: Freaks of Nature let users capture unique creatures for a limited time in the popular Fishing Bot, with proceeds being split between Action Against Hunger and Islamic Relief. In total, users generated over $160,000 for both charities. These proceeds helped an Action Against Hunger water and sanitation project near the Syrian border in Jordan.

We launched a brand-new bot for its 2018 campaign–Hunter Bot. Users could capture special, desert-themed birds during the period of Ramadan. Users reached the mammoth milestone of over 5 million birds caught during the period, raising over $150,000 in the process.

This fund helped Islamic Relief implement projects through a Waqf program, which will yield long-term benefits to thousands of beneficiaries. Action Against Hunger’s project aims to contribute to the enhancement of water quantity for the residents in Khosos – Qalyubeya, through the improvement of the water services by installing a well and water treatment station.

For Ramadan 2019, we worked directly with Action Against Hunger to create unique items for one of our most popular collection bots–Fish. Users could collect and learn about items that help those most affected by malnutrition and poverty in some of the most impoverished areas in the world. We also released 2 unique Action Against Hunger and Islamic Relief Charms, which users could purchase, with proceeds donated to each charity. Alongside this, we also released unique Ramadan Charms to celebrate the holiday.

For the event, we raised a huge $179,000 for Islamic Relief and Action Against Hunger, which was all thanks to our fantastic users.

Grab a mic and join the World’s Online Festival!